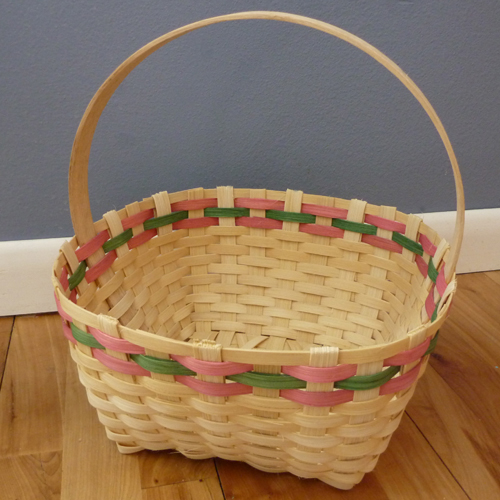 Step 1: The rim consists of two pieces of flat oval reed (either 1/2” or 5/8“ wide).  Start by tapering one end of each of the two rim pieces with a Stanley Surform® Shaver or utility knife.  Shave 2”-3” because this is where the rim will overlap itself. 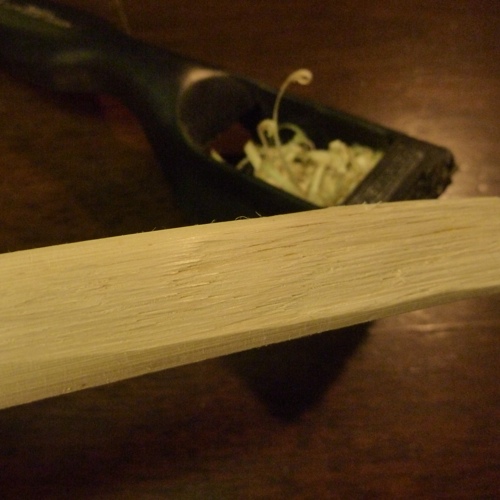 Step 2: Begin by placing the shaved end of the inside rim flat side against the stake just left of the center stake on the side without the handle.

Step 3: Use clothespins or hippo clips to clamp the rim to the last row of 3/8” flat reed weaving and work your way around the inside of the basket in a clockwise direction, pinning as often as necessary to smooth out any bubbles or puckers in the rim.  The inside rim must fit very snugly. 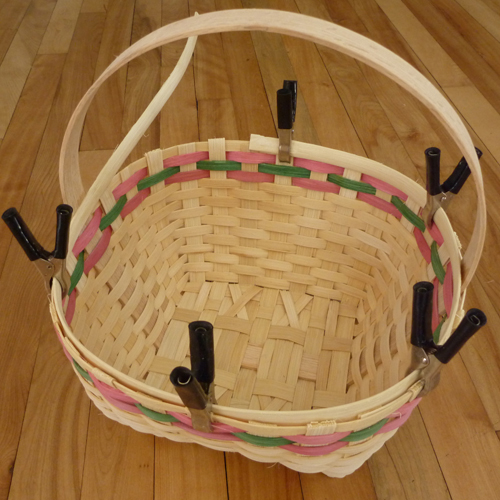 Step 4: The tail end of the inside rim will overlap the beginning of the piece by 2”-3”.  Cut any excess off the end with a diagonal cut. 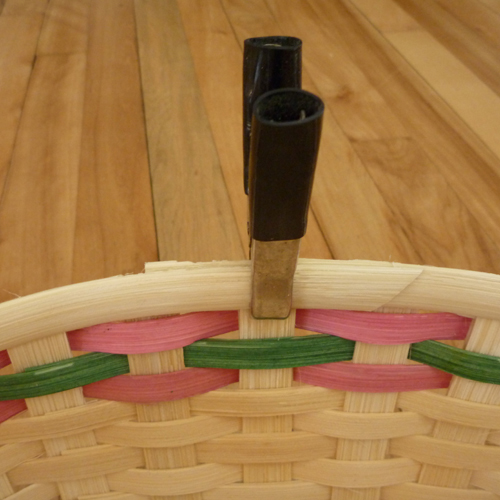 Step 5: Now you will work on the outside of the basket.  The outside rim starts and overlaps on the opposite side of the basket as does the inside rim.  Turn the basket around and locate the center three stakes. Find the end of your lasher (either 11/64” or 3/16” flat oval reed).  Use a flat-tip basket tool to open up a space under the last row of 3/8” flat reed and between the center stake and the stake to the right of it. 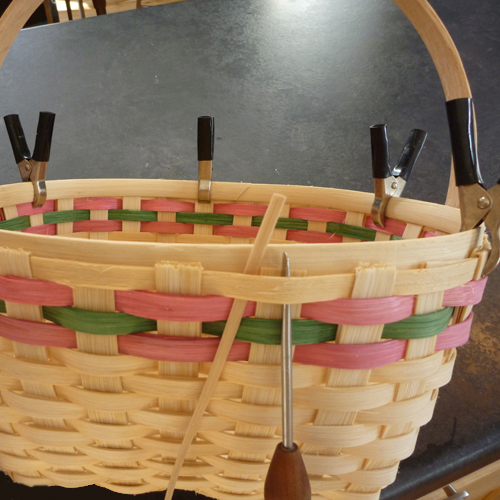 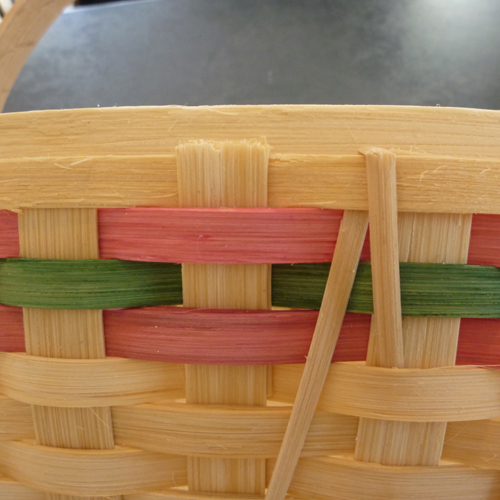 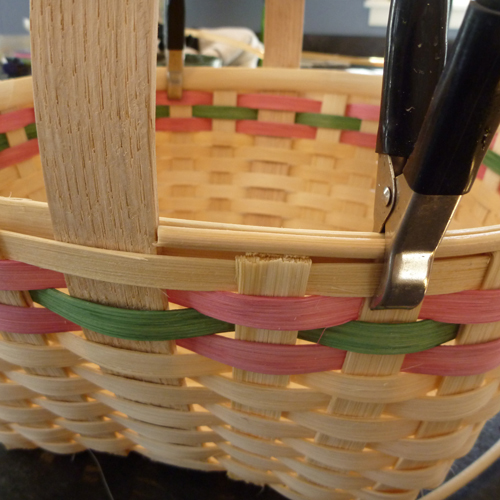 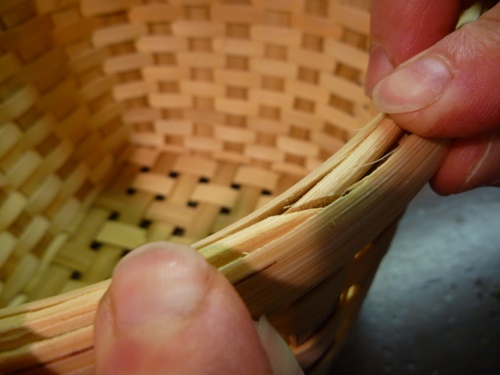 Step 8: Place the shaved end of the outside rim on top of the stake just to the left of the center stake. The outside rim will sandwich the last row of 3/8” flat reed, rim filler and lasher tail with the inside rim. 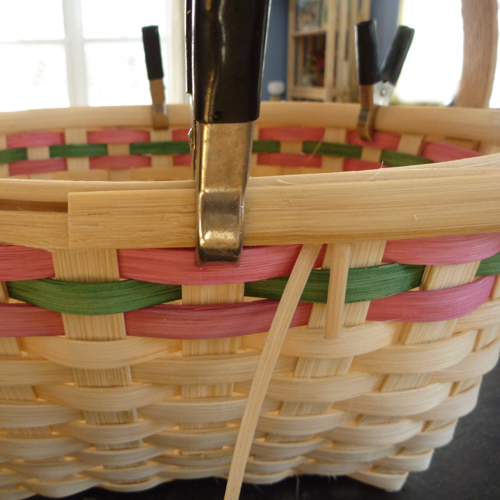 Step 9: The outside rim is clamped in a counterclockwise direction to prevent the rim from puckering as it is lashed later.  Use the same clothespins to clamp the inside rim and outside rim together, sandwiching the rim filler in between. 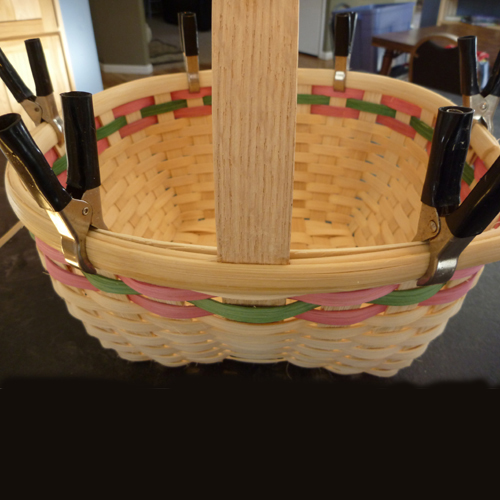 Overlap the beginning of the outside rim by 2”-3” and cut any excess off the end with a diagonal cut. 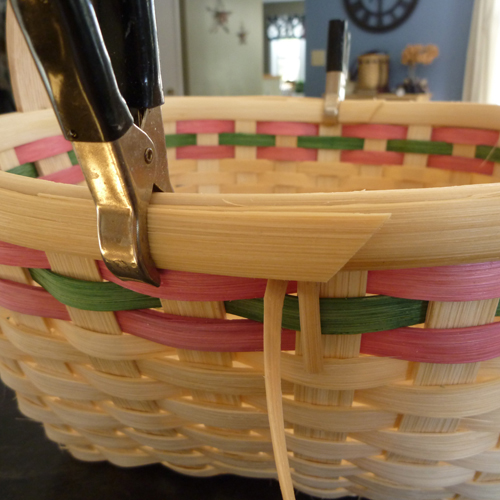 Step 10: Return to the lasher that is attached at the overlap of the outside rim. It is important to unwind the entire length of the lasher so there aren’t any twists in the lasher. (If there are twists remaining when you loop the lasher around the rim, the lasher won’t sit flat on the rim nor will it fit through the small spaces it needs to.)  If desired, you can cut a diagonal on the unattached end of the lasher to make it easier to insert through the spaces. 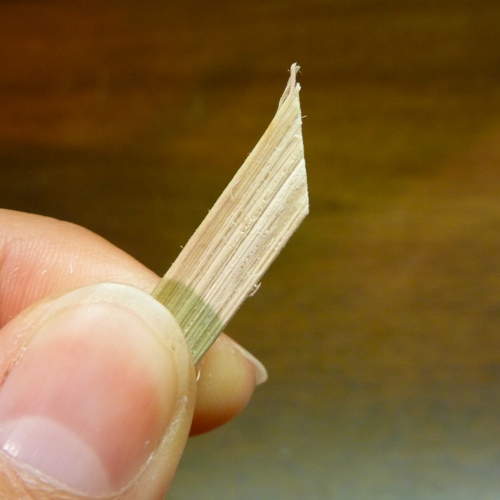 Step 11: Use the flat-tip weaving tool to open a space between two stakes and under the last row of 3/8” flat reed weaving.  Without any twists, loop the end of the lasher over the rim and through the opened space from the inside of the basket to the outside.  The first stitch of lashing needs to catch the tail end of the outside rim to hold it in place. 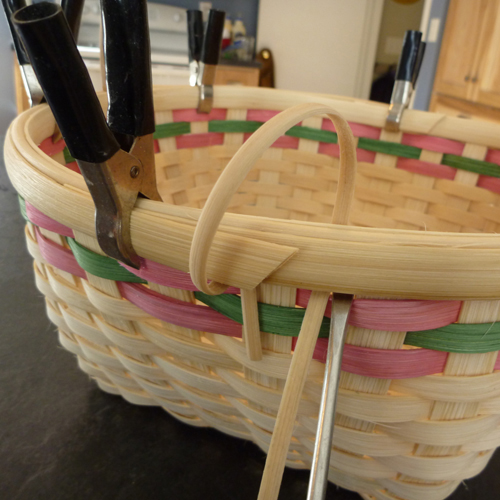 Step 12: Continue opening a space just to the right of the previous space and loop the lasher through from the inside out. Repeat this until you come to the handle. (You will need to go back later and tighten each loop so the lasher holds all of the rim pieces together very snugly.) 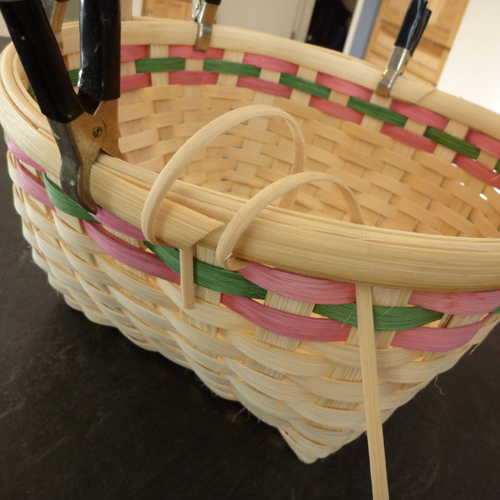 Step 13: At the handle, the lasher forms an “X” by looping over the outside of the handle like a normal loop. 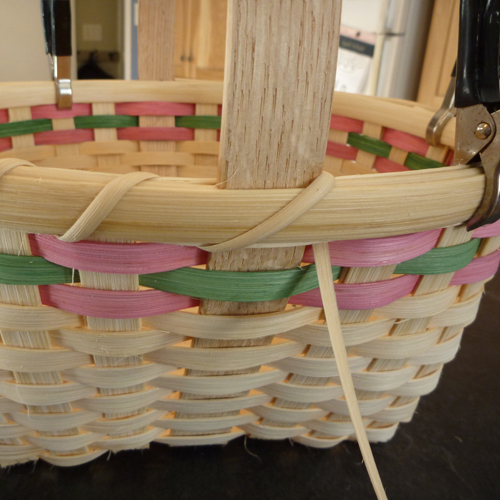 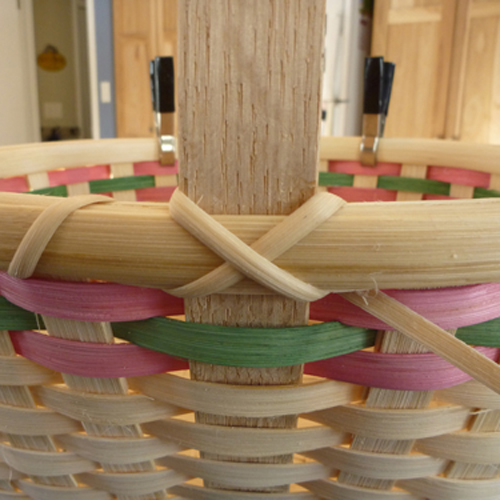 Step 14: Continue single lashing and repeat the “X” on the opposite side of the handle. 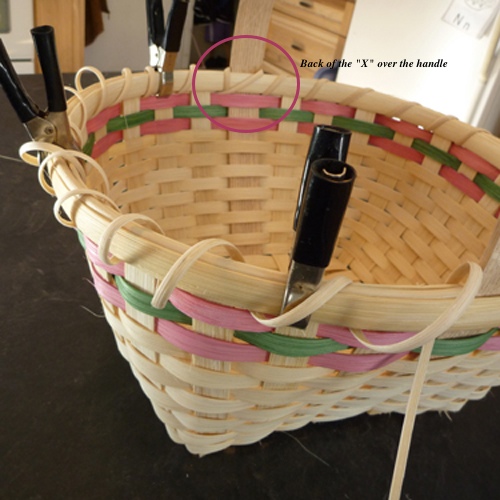 Return to the same space where the lasher began. 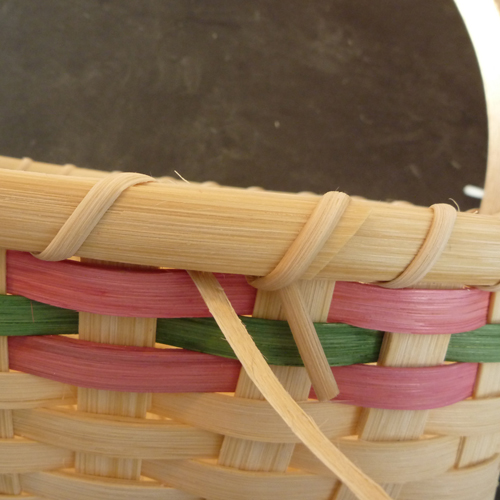 Now go back to the beginning of the lasher and tighten each loop.  Your left hand should squeeze the rims together while using the flat-tip tool to pull slack towards the right.  Be careful to avoid placing too much pressure on the lasher with the flat-tip tool as the reed might break! 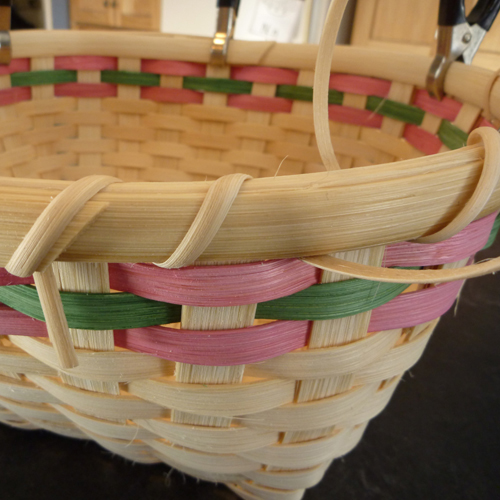 Step 15: Once all the slack is removed from the loops all the way around the rim, you are ready to “lose the lasher”. This term refers to the process of hiding the lasher inside of the two rims while holding the lasher in place. Begin by inserting the flat-tip tool in the same space where the lasher started, but this time on the outside of the last row of 3/8” flat reed weaving.  Slide the end of the lasher up through that opening. 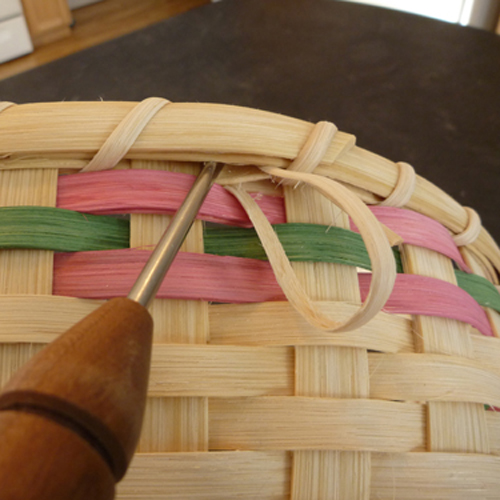 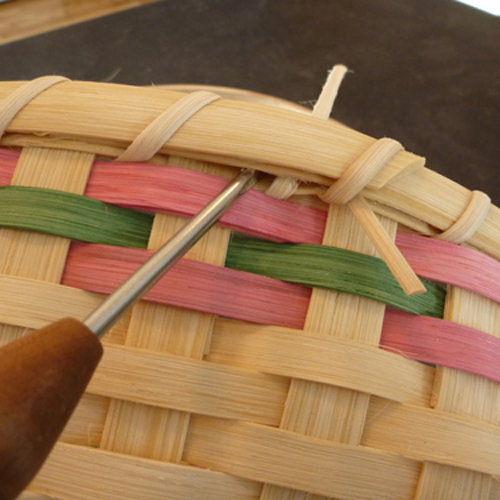 Step 16: Now work from the top of the rim to insert the flat-tip tool between the two rims, but this time on the inside (opposite) of the 3/8” flat reed. 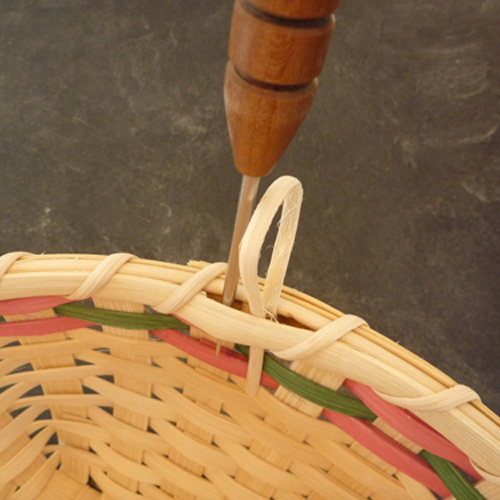 Slide the lasher through that opening, being sure to avoid looping the lasher over the rim filler.  Pull the slack tight.  You’ve lost the lasher! 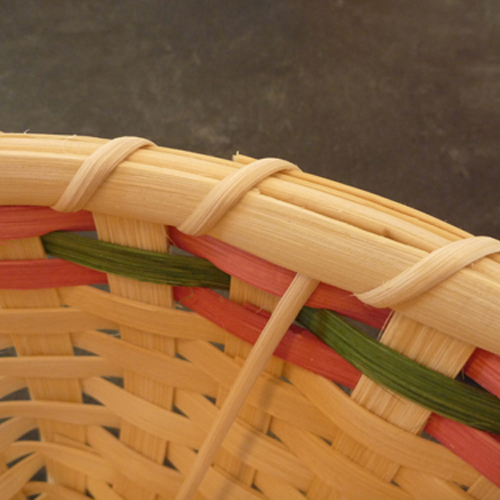 Step 17: Clip the ends of the rims to be flush with the lasher.  Clip the lasher tails with ¼” left, and your basket is rimmed! 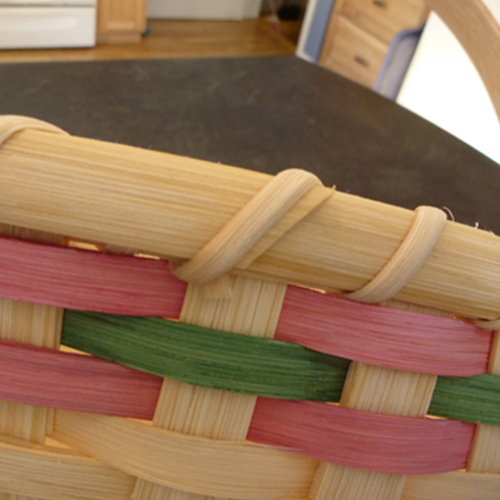 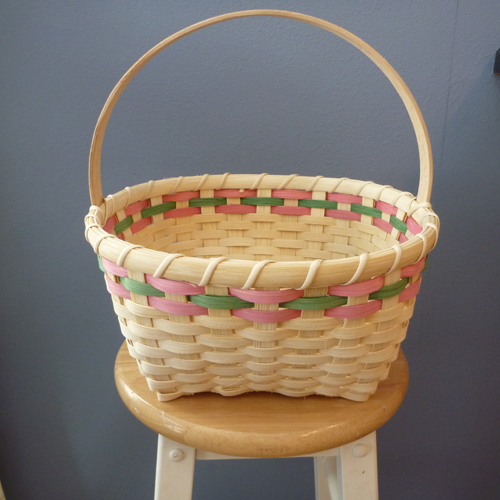 There are no comments yet... You could be the first!

As winter approaches, we now are in the process of trying to locate all of the necessary mittens, hats and scarves. Why not use a Mitten Basket? It measures 13" round and 10"...

Our primitive Footed Wool Basket measures 13" round and 11" tall. It is the perfect companion to your favorite easy chair to hold knitting projects or magazines....